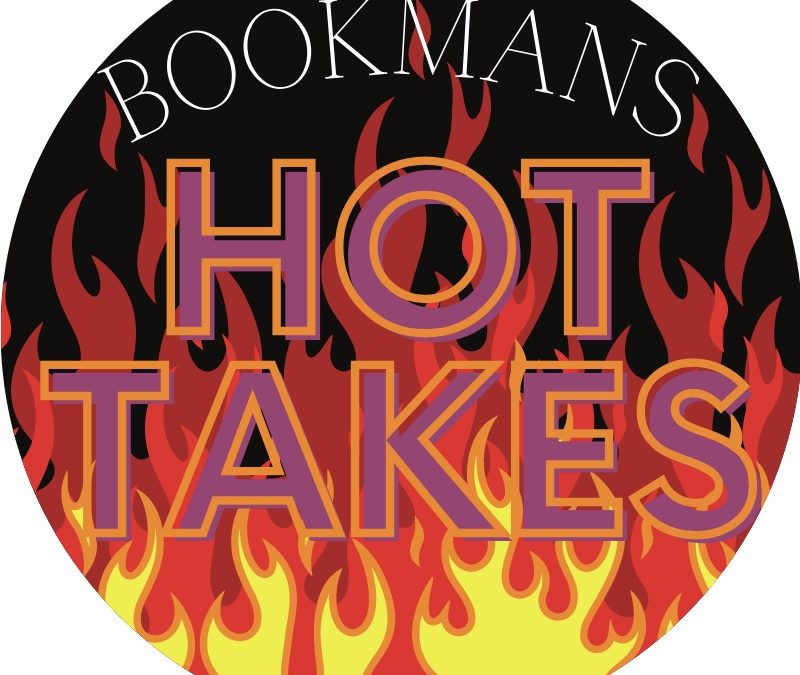 I was told the television series Boondocks was not an anime! THE DISAPPOINTMENT IS REAL. Bookmans Flagstaff crew, without hesitation, fell into a full-blown argument over this topic. One of the spiciest we’ve ever had, actually. It feels very anime to me, definitely matches the energy of one. So you’re feeling it too. Is it wrong to feel this way? Absolutely not! That just means you have a hunger for controversy. It’s okay, we’d like you no other way. Dear child, let us feed you!

Here are a few of our spiciest summer hot takes!

For those potty mouths…

Kids should be allowed to swear! (Bookmans Cafe employee)

Did your jaw just drop? I know, I know but let me explain for our spiciest barista! Swear words are designed to create shock and to be hurtful (not always simultaneously). But it can be valuable to have conversations with our children about their vocabulary. It’s far better to talk about why and how certain words have an effect on people rather than pretending certain words don’t exist.

Swear words can be beneficial from a psychological standpoint! Swearing is a great pain reliever, a tool used for social bonding, and most importantly, good for expressing emotion. Let your kids feel, dammit! Censorship is the assassination of an idea. Continue to instill values such as integrity and human kindness in your children but also allow them to express themselves responsibly and with social awareness.

For those who’ve had enough to drink…

“A vanilla soy latte is nothing more than a three-bean soup.” Really think about that. Is this spicy take wrong? You have all your ingredients: vanilla, soy milk, and coffee beans. Heat it all together with a little water, give it a quick stir, and boom. It’s soup! The only difference is the overly priced venti cup. So next time you’re in the mood for a morning drink just remember your hazelnut soy nonfat with EXTRA foam and two pumps of the espresso is really just a cup of deliciously sweet caffeinated soup.

Do we really need to explain this one? La Croix is gross, guys. SAY IT WITH ME! It’s gross and that’s okay. We’re here for you. Throw that sh*t away. Maybe not the spiciest take, but one that many people agree with! Yes, we know it comes in different fruit flavors. No one cares and you shouldn’t either. Stick to the basics. BWW, or beer, wine, and water, may not be as fancy-sounding, but trust me, you’ll be happier.

For those overhyped celebrities haters…

This one I agree with 100%. Drew Barrymore is America’s angel sweetheart babe. She is great and all, but this shopper is not impressed. Sandler is their trigger word! This part I agree with especially. To me, he’s just not that funny. There are plenty of funny movies with Adam Sandler. Let’s be real, though: the other actors made it funny. I’ve never seen a Sandler movie that left me actively trying to go out of my way to watch it again. NAME ONE! Oh, 50 First Dates? Try again, honey… We’re not impressed.

Don’t come for me, Britney fans, but Glee did her hits justice! Specifically, season 2 episode 2 will rock your world. Don’t believe me? Watch it for yourself. Britney Spears is a phenomenal performer, singer, and woman. No spice, just fact. She’s a legend for a reason. However, Glee’s whimsical charming twist to a few of her greatest hits will make you more appreciative of her art. The Glee characters performing her songs are outstanding, and Britney even makes a special celebrity cameo! It was EPIC and totally worth checking out. Perhaps the spiciest take yet?

Do you agree with our hot takes list? Stop by Bookmans Flagstaff and tell us your most controversial opinion. We’d love to hear from you!