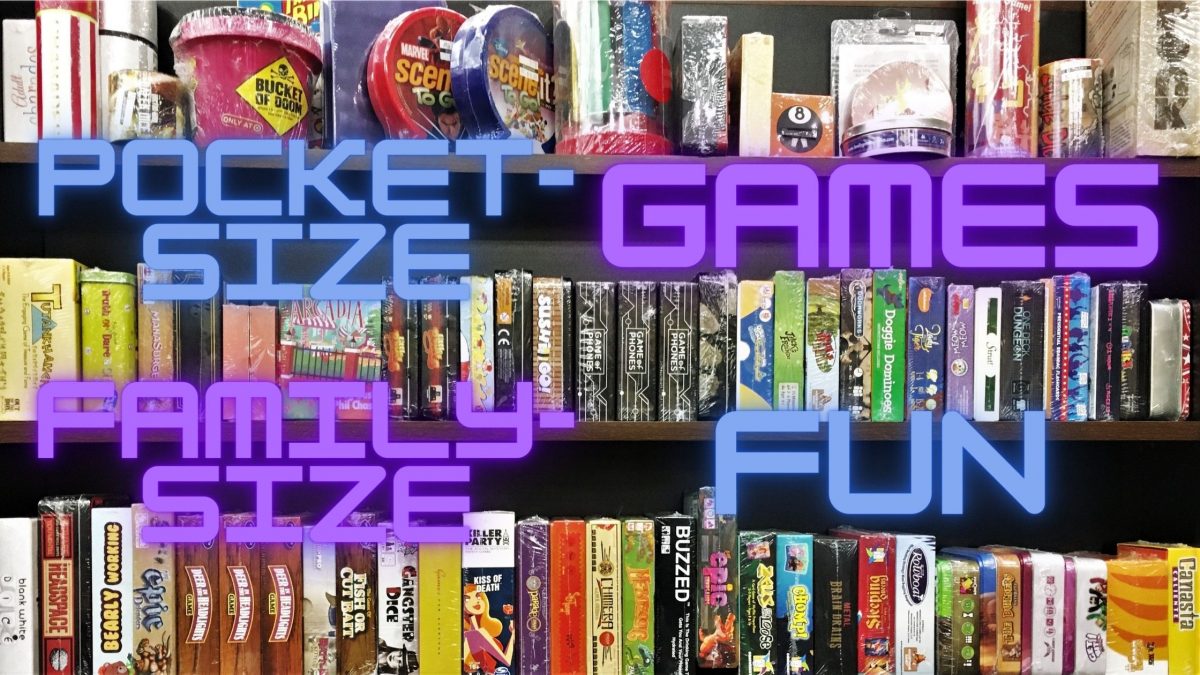 There’s something about pocket-sized games. Is it that they fit neatly under the seats in my car, waiting for a dull moment at a party when I can cry out, “I have just the thing to shake this up a bit!” Or maybe that they aren’t predictable like a deck of cards, and also won’t blow off the picnic bench in a gust of wind. No one actually likes playing 52 Pickup, after all. Or it could be how game designers cracked the code of making something that fits literally perfectly in the palm of your hand. Any way you look at it, these pocket-sized games promise plenty of family-sized fun.

Catchphrase is all the fun of Guesstures or Pictionary, but with a lot less setup. This is a handheld electronic game, which means it does require batteries. But that’s really my only gripe against it. It’s fast-paced and exciting, especially once everyone starts shouting answers, and sets family members against each other. (I said purple! Of course, the catch phrase is rain! How could you not guess that!) Exactly what you need to spice up family game night.

Qwirkle is a tile-matching game that is simple in concept and complex in strategy. There was a period of time in my life when I played this game every weekend. Every. Single. Weekend. For a year. Obsessed? Maybe. But the longer you play, the more you discover new strategies to the game. Also, I’m ridiculously competitive and Qwirkle feeds that.

Like Scrabble, but with its own banana-inspired language, Bananagrams is a crossword-building game. You get to yell fun words like, Split! Peel! Or my favorite, ROTTEN BANANA, YOU CHEATING CHEATER! That’s for when someone who thinks they won spells a word wrong in their crossword. It’s faster-paced than Scrabble, has other variations, and isn’t based on a point system to win. Family fun in spades!

The greatest thing about Farkle is shaking the dice in the cup. It’s extremely satisfying. I can’t explain how to play because there are actually multiple variations; including team vs team variations. Basically, each dice and dice combination are worth a certain amount of points, and the first player to score at least 10,000 points wins the game. Unless you choose a variant that requires more or fewer points to win.

You can find all of these games -and plenty more! (clearly, look at the blog banner. Pocket-sized games are in.)- at your local Bookmans. Don’t forget to tag us on your social media and tell us which games are your favorite!

Want more board game recommendations? How about some classics like these?

Fall in Love with Bookmans!

Bookmans is the Place for December Merriment!