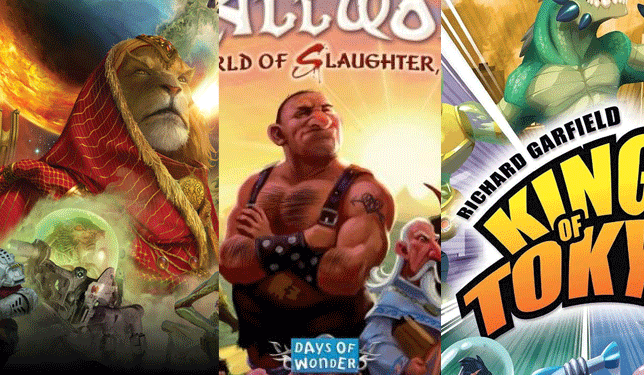 There are a lot of things I love about working at Bookmans but the best part, for me, is being surrounded by so much cool stuff all the time. I love books. I love video games. And I REALLY love board games.

When I am in our stores working, it inevitably happens. I can never leave without taking at least one quick pass of the board game shelves. Much to my partner’s chagrin, I almost always find something that I want to bring home. I’m not sure how many more times this relationship can take the “But it was such a good deal!” excuse. I’ll figure it out one day, I guess.

In the meantime, I’ve compiled a list of my favorite board games I’ve found perusing the board game racks at Bookmans.

Gravwell is so good. It’s my go-to when I’m looking in my collection for something that is quick to learn and doesn’t take all night to finish. The game is so mechanically simple: you play cards to move the number of spaces written on the card on a single track. We are talking Candyland simple. The catch, though, is that every player piece has its own gravitational pull. That means that you have to move in the direction of the nearest piece. Turn order is also randomized by the card you play; each has a letter on it and players move in alphabetical order. Once the simple mechanics are learned, the game becomes a contest in mind reading. Each player then tries to figure out what other players are going to attempt to do. Also, when they are going to try to do it. Every game is filled with those riotous yelps of joy and those sweet, sweet screams of disappointment. Any game that gets people yelling and smiling at the same time is a winner for me.

For those wanting something with just a little bit more strategy and depth, Eminent Domain is a great little box. This is a deck-building game where players generate currency and resources. And you’ll need those to explore planets. Each planet is worth victory points at the end of the game.

On a player’s turn, they will choose an action to do to get them closer to this goal. The problem is that when you choose an action the other players also get to perform that action on your turn, just to a lesser extent. Players have to decide if doing a specific action on their turn is worth it if it also gives something beneficial to an opponent. All the while, players are adding more and more cards to their deck to make it stronger for some actions and weaker for others.

I love rolling dice. I love the shot of adrenaline my brain gets when they leave my hand knowing I might roll something awesome. I love the disappointment of rolling a one. I love their tactile feel; the weight and uniformity they have in your hand. This board game gives me all of that in abundance. Players are playing as giant kaiju monsters trying to destroy Tokyo. Only one monster can occupy Tokyo at a time but doing so leaves them vulnerable to attack from the other monsters. Players roll dice to do damage, earn points, heal themselves, or gain energy. That energy is to spend on cards that give them strong perks. The big decision in this game is deciding to leave Tokyo to gather strength and recuperate or to push your luck and stay in. Of course, that means hoping you can survive just one more turn to get even more points. This game was designed by the great Richard Garfield (Magic: The Gathering, Android: Netrunner, Keyforge, etc.) so trusting that this game was going to be excellent was easy. Definitely worth picking up.

Small World is a map control game similar to Risk or any other military game where players move pieces to different regions on a map in order to maintain control over their dominion. The thing that sets this game apart is that players are using randomly generated races for their armies; putting together two cards that form strange beings like Fortified Elves, Flying Barbarians or Diplomat Ghouls. Each army gets a specific number of units that they can use to spread through the map but often those units get spread too thin. At that point, a player can choose to send that race of creatures into decline, replacing them with a new randomly generated race from the cards. Sometimes the units from a previous race can still score you points by staying on the board so there is a great deal of strategy that goes into deciding when to retire an army for a new one. This one was pretty quick to learn for my family but every turn felt like an important decision. As a bonus, it’s all wrapped in beautiful and adorable art.

Confession time: I have never played this game. I saw it at Bookmans and couldn’t stop myself from buying it after being told for years that it’s a must-own classic. A gigantic box filled with plastic spaceships, alien races, and planets to explore?! I just had to. The only little, tiny, insignificant problem is that everything I’ve read says this game takes at least 6 hours to play not counting the learning process. That’s too many hours for most people to devote to board games. This may cause an immediate refusal and reactions of disgust. I totally understand that. Not everybody wants to sit at a table for an entire day negotiating space politics. But here’s the thing: I really, really want to do that. I’m not sure I can think of anything else I’d rather spend a Saturday doing. One day, when the stars align for my game group, we are going to crack this box open on the biggest table we can find and start making secret alliances and breaking them immediately after. On that glorious day, my friends, the real estate on my shelf that this enormous box occupies will be justified.

Want to see even more board games we recommend? Check out James’ list!

Bookmans Recommends: Christmas Movies to Get You Into the Holiday Spirit