Home > Reel Chat > What Bookmans Geeks Geek Out On

What Bookmans Geeks Geek Out On

Here at Bookmans, we have the privilege to geek out about our work. Best of all, we get paid for it! With collectible knick-knacks and a randomosity of artwork to the beloved video games, books, and movies we all enjoy, it is no surprise that Bookmans is a geek hotspot of Arizona. Because of our ever-changing stock, our geekdoms appeal to any age group. Here’s a list of some of our favorite geek-out items you can come across in our stores pretty much any time of year.

Though a lot of the toys we carry tend to be focused on children, we get quite a few toy collectors in our stores. What are they looking for? The good stuff that has been carefully stored in your great-aunt’s attic for 40 years. They’re looking for everything from Barbies to Hot Wheels to TY Beanie Babies to superhero action figures. It’s no surprise that the first place they look is Bookmans.

Are you a fan of My Little Pony, Star Wars, Transformers, or Legos? Bookmans has cool covered! Be sure to check out the Funko POP! figure collections. There’s practically a whole wall dedicated to a variety of pop cultured-referenced figures. Some of the coolest ones include Nightmare Before Christmas and Dragonball Z characters (to name a few)!

Board Games, RPG,  and Puzzles

Though not an immediate thought when shopping Bookmans stores, items in the games section are still very popular. In board games, the most popular ones you’ll find are chess and checkers. Although classic games like Life, Monopoly, Scene It, Trivial Pursuit, and Yahtzee are still popular as well. They’re even themed-based to update them. How about a Lord of the Rings chess set, Avengers Yahtzee, or Pirates of the Caribbean Scene It? So many geek-themed Monopoly titles (even some Arizona towns) have come across our counters too.

For the more involved and strategy builders, we have role-playing games. So. Many. RPGs. Dungeons & Dragons, Warhammer, Magic: The Gathering, Pokémon… Popular RPGs can be found right next to the board games. Don’t forget to grab the handbooks, guides, dice, and playing cards for collectors too. If that’s not enough, RPG nights and tournaments are held at the stores every month. Want to know when? You’ll find a link near the end of the blog. Game on!

For those that want to settle down and have a little quiet time at the end of a long day, there are puzzles that range from 300 to even 3000 pieces. They come in a variety of designs from animals to landscapes and everything in between. Some of the most popular puzzles include Josephine Wall fairies and Thomas Kinkade Disney scenes. No matter your favorite subject of puzzle solving, Bookmans has something you’ll want. There are also puzzles for the kiddos so you can work together.

In the music section, vinyl is making a big comeback. Though our favorite music can be bought at the click of a button, there are people who prefer buying CDs or records. Physical media just has a certain certainty to it, you know? When we talk vinyl with customers, we always hear that records and CDs have a crisper sound. At the end of the day, it’s just more appealing to listen to physical media than digital music for so many. So Bookmans stores are sure to buy up the popular vinyl that comes across our counters. There’s such demand for vinyl, in fact, that our stores order new release records every month so you can keep your collection pristine from the get-go.

For the Mesa location, the most popular genres tend to be rock, rap, pop, and jazz. In addition, live original music is played by local artists every month so you can discover something new. If you would like to attend the live music nights, you can visit our events page or any of our social media pages to get more details. Yeah, you can geek out with Bookmans about live music too!

Prefer to see a visual version of your favorite stories, books, video games, or board games? We’ve got movies. Lots and lots of movies in all formats from VHS to 4K new releases. Just like with vinyl and CDs, many people prefer to own a physical copy of the movies and TV shows they love. Why? Because digital media has a kind of impermanence to it that physical media doesn’t. You can hold it in your hand and you’re not relying on fast internet speed to watch it either.

Want to be more involved with your RPGs or be a part of your favorite movies? Then video games are a way to go. We’ve got a variety of consoles and games that date back to the early 80s. There’s almost no chance that you won’t find a game you’ll enjoy. Sometimes it’s about playing for the first time. It’s also about reminiscing about the video games you played as a child. Want to know what the most requested game is at Bookmans stores? Super Mario for Nintendo 64.

If that’s not up your alley, don’t worry, there’s a variety of Call of Duty, Wii games, and Skyrim games to choose from (and other fun gadgets to boot). We’re also starting to get Nintendo Switch games in trade, but they fly off the shelves! The best way to find an awesome game, old or new, is to check in with your local Bookmans store often. You never know when the game of a lifetime will be in the case waiting for you!

Of course, we had to save books for last. Bookmans, after all, was originally a local bookstore back in the day. It still possesses the very stories that have inspired many of the things we all geek out on today. Space odysseys, superheroes and supervillains, fantastical battles with dragons and elves, children snooping around haunted houses, teenagers surviving in dystopian futures, history, mythology, adventure, true crime, manga, new age deities… The list is just endless. We’ve got books ranging from rare collectibles to newly ordered hot YA reads.

If there’s something you are passionate about, we’re going to have a book that will suit your needs.

For young children, the classics such as The Chronicles of Narnia and the still loved Harry Potter series are favorites. One that quickly flies off the shelves for little ones is the Dog Man series. They’re also appealing for adults, mainly for their titles. There’s one titled Lord of the Fleas, for example.

Young adult reads have four categories of YA books. There’s the classic fantasy/medieval fiction, dystopian “Chosen One” stories, urban fantasies, and real-life scenarios. Some popular titles include The Mortal Instruments series and their spinoffs, Thirteen Reasons Why, The Divergent series, and the Throne of Glass series.

For any other genres, there are too many to name. I can write a very long blog with geek-out rants on books alone. Perhaps the best shelves to find any book that will be from selected areas in the store are our “Book to Film” and “Hot Titles” shelves. From horror to advice, from poetry to historical events, you’ll find almost any kind of book on these two shelves.

Bear in mind that I can only speak for the Mesa location as you continue. Some of the most popular merchandise the Mesa store sells consistently are based on Star Wars, Star Trek, Super Mario, Dog Man, Lord of the Rings, and Game of Thrones. Currently, the latter is the most popular among the employees and customers alike.

From toys to books, and from the vinyl record soundtracks to the 1-7 Season DVDs, Bookmans is the right place to get your GOT craving satisfied.

Want to geek out in our stores? Check out our cool events that take place every month on our events calendar. We’ve got RPG Nights, book clubs, Pokémon tournaments, and more.

This blog was written by Sky D., Customer Service – Mesa

Schoolboy Q’s most anticipated album yet 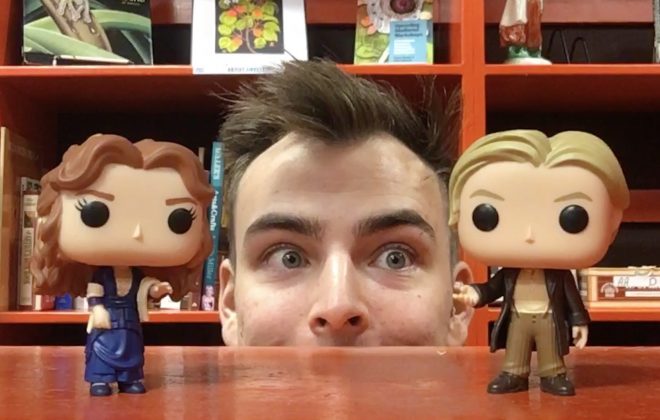